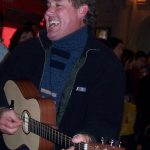 The beauty of a single like “Stay In America” is various. It takes something gripping current events, the possible deportation of “Dreamers”, and makes it an intensely human experience for audiences while never taxing their suspension of disbelief. Delima’s songwriting faces the hard questions and unforgiving realities behind the possibility of being forced to relinquish their hopes for the future thanks to pure heartless politics. She embodies that desire and quandary quite exceptionally with her voice and Marc Swersky’s production frames her lyrics and vocals with great sensitivity, yet the song contains more energy than you’d think. The delicate, yet sturdy, balance the song strikes between Delima’s performance and the musical backing is one of the most important parts of what ultimately makes this song a success. The song, co-written by Delima, and Brielle Brown, says something that needs to be heard and does it in a way guaranteed to entertain many.

A real team effort goes into making “Stay in America” a great, all encompassing musical experience. The promise of a modern classic that captures the best elements making for the most memorable pop music comes across here with amazing naturalness – the song sounds like it’s cut live in the studio and the accompanying press materials for the song back that up as producer Swersky made a decision to capture eighty percent of the backing performance live in the studio. The players on this track all boast impressive pedigrees and play together like they’ve been doing this as a band for years rather than just coming together for this song. That achievement alone ensures this will be a memorable outing, but Ashley Delima’s vocal and the melody line she hangs it on underlines the song’s overall quality and matches up with the arrangement in a way that’s sure to both attract the casual musical fan and hardcore devotee. There’s obviously a great deal of thought that’s been put into making this song a success but, like the greatest songs, you don’t hear any strain or see the sweat and tears spilled to put it together. Instead, it just flows out in a wholly natural way.

It’s topped off with some of the finest, most inspiring lyrics you’ll hear in recent pop music.. The indie vibe of the song is quite real, but the commercial appeal of the song comes across with a memorable vocal melody and a chorus that stands out just as much for its sense of tasteful restraint as it does its catchiness. The graceful lyrical writing approaches the question of how we should deal with protecting immigrants born in this country but lacking citizenship status by asking questions rather than painting the issue with the broadest possible brushes. Instead, there’s nuance and intelligent informing every second of the song and “Stay in America” achieves a rare feat – it connects with audiences on both a mental and physical level without ever seeming forced.